Man From the Future 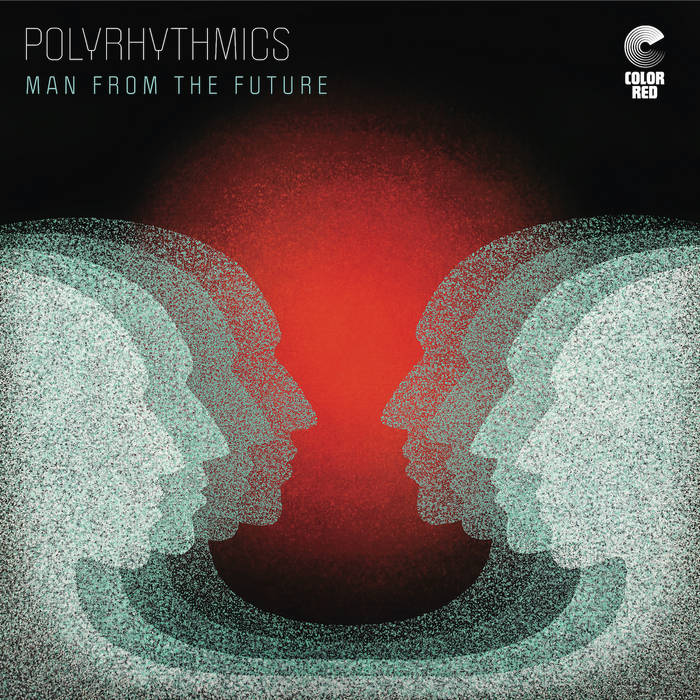 Slipping through the cracks of infinite timelines, Man from the Future just can't put his past behind him. His journey can be filed as a score for breaking the space-time continuum as written by the Polyrhythmics releasing their sixth full-length studio release coming out on Color Red on May 8, 2020. Continuing the band’s exploration across genre and stylistic lines, Man from the Future documents them at their most evocative and cinematic yet.
Spurring particles from their previous LP Caldera, Man from the Future rises out of the ravine to tell a tale that paints vivid stories that bridge the gap between the past, present, and future tying them together on one plane. That imagery alone plays into the writing process behind the album. Reflecting Caldera, there is music featuring and authored by each member of the band on this record. With tunes penned by each of the eight members of the ensemble, each paints their own account with the Man from the Future and etches their mark in the continuum. Also much like Caldera, the music for Man from the Future was composed at a mountain retreat, this time in the Mysty Mountain Properties alongside the Skykomish River in Barring, WA. During their stay at this ranch compound, the band got snowed in, hunkered down, and spent the 72 hours running grooves and melding ideas together. “Time was not an issue,” explains drummer Grant Schroff.
From workshopping grooves in the mountains came months of road-testing songs that would see the group refining their deepest vibes and heaviest grooves to date. Man from the Future is a collection of songs that transcend your typical head-solo-head format. A collection of songs that serves as a fresh palate for every member to fulfill both rhythmic and melodic roles. And a collection of songs that can conjure an abundance of imagery and emotions without saying a word. “People want to search for a mood rather than an artist when they’re listening to music these days,” says percussionist Karl Olson, “We’re creating a vibe that happens within a song and it happens at several points across this album. A lot of people will want to listen if they know that they can evoke a mood out of this music.”
Man from the Future is a “track-to-track musical landscape,” continues saxophonist and flautist Art Brown. “Yeti Set Go” sets the stage for Man of the Future’s quest through the space-time continuum with a Daktaris meets Roy Ayers soundscape. “Digital Cowboy” is poignant and calculated beckoning the future with synthesizers exploring modern sounds and fusion-based modalities. Fast forward to “In the Trees” and you find the band pulling influence from Italo Calvino’s 1956 novel The Baron in the Trees to create a stripped-down spaghetti western tune that stirs up a pensive sound palate. The scaled-back instrumentation features guitar, bass, an old Italian Vox Continental, light percussion and synthesizers and is unlike any tune the band has released prior. “We are able to take much bolder steps in composition and production style to create distinct feelings,” explains Olson. “Chelada” is a spicy melange of flavors where the band veers away from traditional compositional tactics. The rhythm section is at the forefront and the horns are in the background. The melody is carried by Ben Bloom on guitar and Jason Gray on bass while backed by Scott Morning on muted trumpet and Art Brown on flute playing horn pads. The static grooves give headway the synthesizer and percussion to stretch out. The title track “Man from the Future” takes direct queues from Tower of Power’s “Man from the Past” and features Schroff’s linear-style drumming and funky pocket grooves tipping their hat to Herbie Hancock’s iconic fusion album Thrust.
The biggest takeaway from Man from the Future is that this is an album that transcends any type of formula and creates vibe pockets. “It’s a live instrumental mixtape,” says trombonist Elijah Clark. “If you think about a DJ crafting a set, it’s more about crafting pockets of different vibes. There’s tension and release and it’s less about songs and more about a cinematic piece of music that has different movements,” Schroff elaborates.
Now on their sixth album and tenth year performing, Polyrhythmics, take all sonic exploration experiences of past albums combined with mad scientist experiments testing the tunes on the road and roll them into the final product that is Man from the Future. “We learn so much about how to get the sounds we want—and we do this ourselves. Every record we make, we build off the experiences of the last record,” says Schroff. The album was recorded at Studio Aleph and engineered and mixed by the band’s bassist Jason Gray at Blue Mallard Studios. It was then mastered by Doug Krebs of Doug Krebs Mastering and will be released on Color Red, record label and music platform founded by Eddie Roberts of The New Mastersounds.

Now on their sixth full length album and eleventh year performing, Seattle's Polyrhythmics take all sonic exploration experiences of past albums combined with mad scientist experiments testing the tunes on the road and roll them into 2020 releases 'Man from the Future' and the companion EP 'Fondue Party' ... more

Bandcamp Daily  your guide to the world of Bandcamp

Featured sounds from Fly Lo and Ahmed Idris, plus Mother Nature hops on to drop off new project